WMLO was formed in 1982 by Les Pursey, initially as a small band to play in shows around the Kidderminster area, but it soon transmogrified into the band in the form it is today.

Les started to write arrangements for WMLO and was renowned for his inventiveness in arrangements, plus the fact that he could write additional parts in the breaks in rehearsals!

Les died from cancer in the mid 1990s, and the position of musical director was taken over by Hillary Summers in 1994. Hillary moved on to new pastures in 2006, and David Etheridge was appointed musical director later in that year.

Other notable members of the orchestra with their own websites include Phil Rawle.

Les Pursey's arrangements currently form the majority of WMLO's repertoire, while Bob Birch has written the bulk of the newer charts for the band. Other arrangements have been provided by Phil Rawle (alto sax/clarinet), Phil Mountain (baritone sax/flute) and Hilary Summers (our previous Musical Director).

Our Master of Ceremonies is the redoubtable Peter Tomlinson who has an impressive and chequered history.

Who else can lay claim to fame as a continuity announcer for Harlech and ATV Midlands, straight man to Chris Tarrant on the first series of Tiswas (I think he prefers to forget about that), as well as being the moving force behind Saga FM? Peter’s unrivalled experience and knowledge of our repertoire makes for an informative, entertaining and smooth running show, giving you backgrounds and insight into the music we play. You’ll learn much that you might not previously have known, and he has often given the musicians insider information on the music and composers. 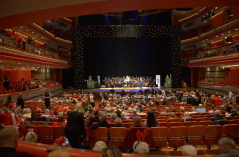 Soon to be under new management (as the sign on the pub says!)